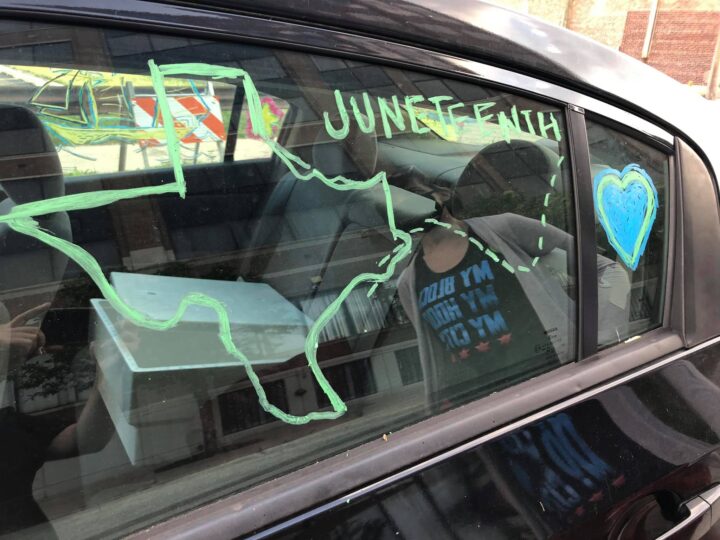 In response to recent civil unrest and calls for action to address racial injustice, Rep. LaPointe participated in two car caravans led by the Northwest Side Coalition Against Racism and Hate. The first commemorated the life of George Floyd and the second educated local Chicagoans on the history of Juneteenth and enslaved people in the United States.

The Northwest Side Coalition Against Racism and Hate is a grassroots community organization that formed in June 2018. Originally formed in response to a hate crime in Caldwell Woods, the group has since organized and partnered with other community organizations on dozens of actions and events. The organization is committed to fostering an antiracist and inclusive culture on the far northwest side of Chicago.

On May 30, Rep. LaPointe took part in a car caravan with the coalition alongside dozens of neighbors. This action served to create a visual presence of justice for George Floyd and a call for the need to address systemic racial injustice. She is grateful that this group of committed neighbors actively creates a local on-ramp for people to learn, talk, listen and act.  Whether stepping up for the first time or the 50th time for racial justice and equity, Rep. LaPointe encourages people to think about what they can do locally that will impact the entire city and the entire country.

On June 19,  Rep. LaPointe joined her neighbors again to celebrate and recognize Juneteenth. Participants decorated their car windows with symbols of enslaved people’s struggles and history in the United States. As she drove through the neighborhoods of the far northwest side of Chicago, many people honked and waved in support of Juneteenth. Rep. LaPointe would like to thank the Northwest Side Coalition Against Racism & Hate for creating space for people to listen, talk, learn and change the world for the better.