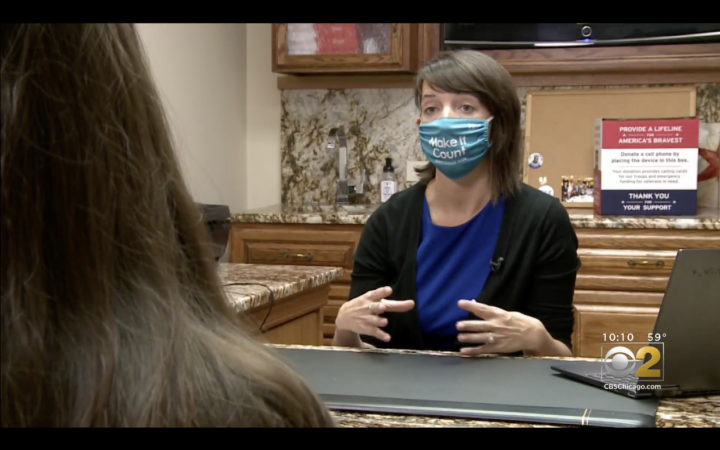 Illinoisans Are Being Ordered To Return Unemployment Overpayments Caused By State’s Mistakes; State Rep. Is Seeking To Stop It From Happening

It is a jump of 38 percent compared with the previous week, and it is putting a strain on an unemployment system already struggling with a crush of pandemic claims.

As CBS 2’s Tara Molina reported Thursday night, there are new calls for the Illinois Department of Employment Security to stop demanding laid-off workers pay for the state’s mistakes.

As soon as the letters started going out, telling people they owed thousands back in unemployment money, we started hearing from them – desperate and not sure what to do.

Molina sat down with a state representative working on a solution – circumventing the unemployment office with a bill that would help some of those people.

One of those people is Paula Guiliano.

“When it shut down in March, so did my business,” she said.

Guiliano was hard by the pandemic. She is still out of work and out of business.

Guiliano said Pandemic Unemployment Assistance benefits helped her get back on her feet. But 19 weeks later, she got a message from the state that she owes more than $5,000 back.

Deductions of weekly benefits have that number at just over $4,600 now.

“So you have mounting bills, that maybe you can’t cover everything, and then you’re hit with another $5,000 bill without any explanation,” she said.

For weeks, Guiliano said she has tried to address the overpayment issue with IDES. But like so many others, she’s stuck in a queue waiting.

Through a series of public records requests, we received and reviewed internal IDES documents showing there are thousands of others in Guiliano’s position, and that delays at state level have contributed to some of the overpayment issues.

It is money the state is now hard at work trying to get back.

We found state Rep. Lindsey LaPointe (D-Chicago) of the Northwest Side hard at work on something else.

“People are desperate,” she said.

A new bill that would prevent IDES from going after people like Guiliano when the overpayment issue is the state’s fault.

Illinois wouldn’t be the first state to do it. Changes made in Texas during the pandemic now prevent their unemployment office from demanding repayments when overpayment is the state’s fault.

Now, Rep. LaPointe’s office is collaborating with others to work out where the money would come from.

“We are in the process of doing a fiscal analysis to figure out what exactly the fiscal impact would be on the state,” she said.

LaPointe said nothing can happen officially until state legislators get back to Springfield.

On Thursday night, with that $5,000 bill in the back of her mind and no job to pay it back with, Guiliano said she is hopeful – for herself and others – that a solution is in her state representative’s hands.

“I’m hoping that the system, or the bill, can waive that money,” she said.

“The new federal PUA program is unique in that, per federal guidance, PUA claimants are required to enter their own income when certifying for benefits. This is different from regular unemployment insurance, where employer wage records are used to verify benefit accuracy. Federal law requires states to verify income that PUA claimants reported when applying for benefits, which results in IDES finding instances where claimants have received benefits for which they are not eligible. Federal law, per (U.S. Department of Labor) guidance, requires states to attempt to recoup unemployment insurance overpayments for both regular UI benefits and PUA benefits. The USDOL has historically reviewed potential changes to state law, and any change to state law as it pertains to either type of overpayment would be discussed during the agreed bill process.”