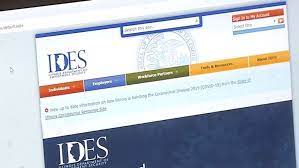 Read the full article and watch the accompanying video here.

Rep. LaPointe was featured in CBS Chicago for speaking out about IDES overpayment mistakes during the pandemic.

According to CBS 2’s Tara Molina, Rep. LaPointe is speaking out about the state’s overpayment issue, saying if the state made a mistake that led to an overpaid claimant, she thinks the state should take more of a role in fixing it.

LaPointe said the state could be reaching directly out to claimants they already know to be overpaid – which LaPointe called the proactive option.

“They know who they are,” LaPointe said.

But instead of doing that, Illinois chose to send out more than 40,000 questionnaires to Pandemic Unemployment Assistance claimants.

“IDES is putting a paperwork mechanism in place to start the process of a claimant requesting their overpayment to be waived,” LaPointe said. “That’s not necessary. Why would we create another loop? We should be making it as streamlined as we can, and I believe that IDES has the ability to do that.”

LaPointe explained that the U.S. Department of Labor said the states could approach the problem of dealing with overpayment in two ways. States could wait until recipients ask for an overpayment waiver using the state’s overpayment form, or they could just ask proactively to review overpayments on a case-by-case basis and grant wavers or return any money that has been repaid.

Instead, she said, the IDES is having overpaid unemployment claimants fill out paperwork.

“Again, this is an issue of equity,” LaPointe followed up by email. “During this crisis, it is inhumane to ask people to fill out complicated forms when they’re already overwhelmed – especially when they’re frightened that they may be on the hook for thousands of dollars.”

She reiterated that most of the overpayments occurred because of errors on IDES forms – not errors on the part of the claimants.

“I think it makes sense for IDES to take responsibility for reviewing these overpayments without making claimants initiate the process of waiving an overpayment balance,” LaPointe wrote. “They should simply take action, and not create an additional burden for people who have so much to deal with already.”