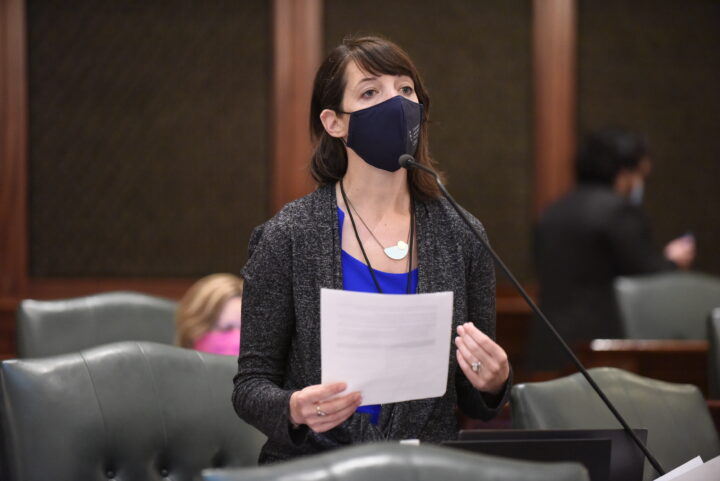 Now that our busy session in Springfield is (almost) over, I’m pleased to report that we made some real progress on issues that matter to the people of the 19th District, and I wanted to give you an update on what the General Assembly accomplished together.

I also want to make sure you know about the 12 bills that I have sponsored and passed so far during this session. These bills increase access to mental health support, expand opportunities for our young people and adults with disabilities, and support workers.

I’m very proud that we passed a fiscally responsible state budget that doesn’t raise taxes and meets our obligations to public schools by fully funding our relatively new evidence-based funding formula. I worked hard to make sure that, for the first time ever, we adequately funded the Division of Developmental Disabilities at $170 million. Due to our historical neglect of adults with disabilities – Illinois ranks 47th – we are under a consent decree and have 17k people waiting for adult services. The budget also pays off debt early and addresses our backlog of bills, putting us on a much healthier fiscal foundation going forward.

Our restaurants and bars will benefit from the extension of the “cocktails to go” initiative, which provided crucially important revenues to struggling businesses during the COVID-19 pandemic. The new law, signed on June 2nd, allows for single servings of “to-go” wine and also authorizes retailers to purchase alcohol from distributors with credit cards. In addition, we passed another new law allowing curbside pickup, self-distribution, and special event permits for Illinois breweries and brewpubs. Unfortunately, this is a weaker version of a bill I cosponsored that was championed by the Craft Brewers Guild and locals like Lake Effect Brewing Company. As I continue to work on this important issue for our small businesses and neighbors, please remember to support your local brewers like Alarmist, Old Irving Brewing, and Lake Effect.

We passed a new ethics bill that will stop the “revolving door” by prohibiting legislators from becoming lobbyists immediately after they leave office. The new law also empowers the Legislative Inspector General to initiate investigations without prior approval of the Legislative Ethics Commission, which means powerful legislators can’t stop an investigation before it even begins.

Restoring trust in our government and politics is a top priority for me because its absence decreases participation in local democracy. Our government depends on the people’s confidence that their elected officials are working in the people’s interests, not their own. I was deeply troubled last summer by the scandal surrounding former Speaker of the House Mike Madigan, which led me and many of my colleagues to boldly demand that he step down. Today, we have a newer (and younger) General Assembly and we must continue to rebuild trust with future ethics reforms.

We passed legislation that requires health insurance companies to cover telehealth treatment permanently. As we discussed in a virtual community event in March after many of you reached out to my office directly, these services are especially important for people who need access to behavioral and mental health services, and for those who are homebound or who do not have reliable transportation. During my years in social work, I saw firsthand just how important mental health treatment access is to people in crisis, and I am so pleased that we are taking practical steps to get rid of unnecessary barriers to care.

Election Day in November 2022 will be a state holiday under a major new elections bill. The date of the 2022 Primary Election is being pushed back to June 28, with early voting starting on May 19. These changes needed to be made because the final results of the U.S. Census were delayed by the pandemic and by the Trump Administration’s unlawful attempts to exclude non-citizens from the census count. The bill also strengthens the cybersecurity of our voting system and creates a permanent vote-by-mail list, so voters won’t have to apply for mail-in ballots before each election.

We passed an omnibus housing bill that will create new incentives to build affordable housing throughout Illinois, including a grant program that will support affordable housing in areas that were disproportionately impacted by COVID-19. This program also extends the Illinois Affordable Housing Tax Credit for developers and uses federal dollars from the American Rescue Plan Act to supplement affordable housing developments.

After a long series of meetings with our law enforcement community, we passed a trailer bill that clarifies some issues in the historic criminal justice reforms that were signed into law earlier this year. These changes were fully supported by law enforcement groups, as well as reform advocates, and we expect more clarifying legislation to come.

At long last, due to the passing of HB40 which I was proud to cosponsor, students with disabilities between the ages of 18-21 can continue receiving special education services until the end of the school year of their 22nd birthday, rather than being pushed out of school on their 22nd birthday. This is incredible news for our families! I give much credit to the parents and Local School Council at Vaughn Occupational for educating me on how critically important this is.

Many of you submitted witness slips for SB1655 to transfer the Dunning Read Conservation Area land to the Chicago Park District, which will allow development into a natural area and community park! This bill passed both chambers.

As you probably have heard, there are some important bills that still need action by the House. We’re still working to pass HB 2643, which addresses the rocky road many of you have experienced when attempting to access deserved unemployment benefits. The bill will overhaul the way the Illinois Department of Employment Security (IDES) handles claims. Under this bill, legislators will be able to communicate directly with IDES when a constituent has a problem with unemployment benefits. In addition, the measure also requires IDES to report fraudulent claims to the Illinois Department of Revenue and creates further protections for applicants’ private information. This bill includes important provisions of my own bills, HB3851 and HB1204, which will make life easier for people who received non-fraudulent overpayments of their state unemployment benefits during the pandemic. Under this bill, IDES will waive repayment of those excess funds for people with financial need.

I am extremely disappointed that we were not yet able to pass a comprehensive energy bill before the end of the regular session, not only because I care deeply about the environment and clean energy, but also because so many of you have made your voices heard on the Clean Energy Jobs Act. In the final days of session, I was proud to join my fellow members of the Illinois Legislative Green Caucus in signing a letter to Senate President Harmon and Speaker Welch, making clear that we will not support any energy bill that does not prioritize climate, communities, and consumers. When we go back to Springfield to get this job done, likely in June, I will continue to represent your priorities and my own values by standing up for Illinois’ green energy future.

I am hopeful that we will make history when we return to Springfield with a final vote to create an elected school board for Chicago. My own Senator Rob Martwick and my seatmate Leader Delia Ramirez, have worked hard to forge a compromise plan in which Chicago would have a fully elected board by 2027. I look forward to bringing democracy to the leadership of our city’s public schools.

As you can see, it’s been a busy time, and we’re not done yet. To all of you who have reached out on big issues – the environment, telehealth, support for our craft brewers, ethics reform, and more – thank YOU for participating in democracy and making your voice heard.